Researchers at York University have found a new role for a well-known protein in the body that may explain, in part, what goes wrong in certain cancers, as well as vascular and neurological disorders.

β-catenin, a wide-ranging and important protein for the regulation of cell function from the embryonic stage to adulthood, has already been implicated in the development of certain cancers, including colon, breast, leukemia and melanoma. 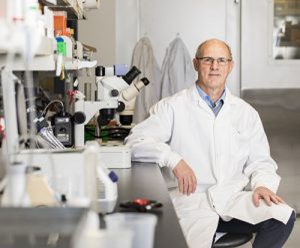 Lead researcher, biology Professor John McDermott of the Faculty of Science and his team, have found new intracellular interactions between β-catenin and other proteins, which highlight a previously unknown role for this protein.

They show that β-catenin not only has a role in gene expression, but it is also implicated in the control of messenger ribonucleic acid (mRNA) translation – the process by which genetic information is translated into protein in the machinery of the cell.

The findings surprised the researchers. “β-catenin is known to have an expansive role in cell biology, including a role in the nucleus in gene expression and at cell membranes, but this finding points to a new, and potentially important role for this ‘jack-of-all-trades’ protein,” said McDermott. “It’s a novel role for β-catenin which was previously unknown despite there being thousands of published papers about this protein in the scientific literature.” 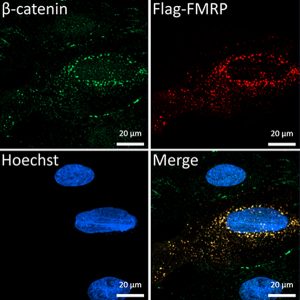 In this set of images, the localization of b catenin (green, top left) and FMRP (red, top right) are shown. The cellular nucleus is stained blue (lower left). The merged image (lower, right) indicates the co-localization of the two proteins. Images adapted from bit.ly/2zbxF1b

In collaboration with the Bayfield lab at York, they found evidence that β-catenin is recruited by the fragile X mental retardation protein (FMRP) to the cellular machinery to help regulate the translation of mRNA into protein. mRNA carries the genetic information about amino acid sequences in proteins, which it copies from the DNA.

The research indicates that β-catenin, when recruited to the translation machinery, represses translation. Upon appropriate signals, it then leaves this complex to allow cellular protein production to be increased. If proper regulation doesn’t happen at this step, it could contribute to problems associated with some cancers and neurological diseases.

This newly found role for β-catenin is important as it provides a window into a process that was previously unknown and that can potentially lead to the development of novel therapeutic interventions.

“The next steps are to try to target these novel properties of β-catenin in various disease states,” said McDermott.

The research paper, “FMRP recruitment of β-catenin to the translation pre-initiation complex represses translation,” is published in EMBO Reports.