On July 1, 2019, Thomas Loebel celebrated one year as dean of the Faculty of Graduate Studies… but his time at York stretches back far longer. He joined York in 1996 as an assistant professor in the Department of English in the, then, Faculty of Arts (now Liberal Arts and Professional Studies), and his many administrative positions have included two stints as Director of the Graduate Program in English. As an academic, his research interests include American and African American literature in the 19th& early 20th-century, literary and cultural theory, psychoanalysis and continental philosophy. 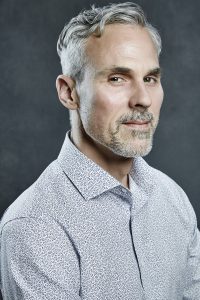 You joined York in 1996. What brought you here?

Really an idea. York was the university which, strangely enough, seemed most like one at which I had done my graduate work. That meant to me a place where I could cross boundaries, and where people could teach what they wanted, because York was an idea-driven place. And it was big, so the prospect of really working with people in fine arts, in science… that just seemed wonderful.

What were your research interests at the time?

I phrase it this way: always my interest was composition. In some disciplines they hear that as “writing skills.” My other discipline is music, and we hear that as “composing.” And it really was a blend of the two. It was a blend of language, of notation, and therefore composition, to compose ideas with a sense of tonality, rhythm, phrasing—all of these words sit in both disciplines.
So, I was a music and poetics guy. And in grad school I had these wonderful opportunities to be working in the music department—art songs that were compositionally different settings of Dickinson poetry, Whitman poetry. Being able to analyze their composition and then perform… that was total heaven.

It morphed into… you can’t even call them “side interests,” they were just part of the interest. So, sound in America—the sound of American language. I read Henry James’s wonderful lecture, “The Question of our Speech, and thought, “I love this!”

What are the most American-sounding authors, do you think? William Faulkner?

Well, it depends on your America. I mean, sure, these are all sort-of myths of America. My America is Henry James. In one sense, a truly perverted, perversely true, America is Faulkner—a decayed, perverse America is Faulkner. I love Faulkner. Between Whitman’s “barbaric yawp” and Ginsberg’s “bop kabbalah,” there is Faulkner’s “bellow” of loss.  But it’s also puritan literature, and the jeremiad of the protestant tradition of the sermon, which then morphs into types of American Methodist and Baptist sermons. The cadences of that speech… it’s wonderful.  It’s Frances Harper’s Iola Leroy.  It’s James Weldon Johnson’s God’s Trombones.I mean, it’s American and African American, it’s biblical, it’s streetcorner soapbox, it’s musical, it’s rousing language, rousing speech. And therefore, those speeches and sermons are usually about justice, values, and ethics.  It’s righteous, demandingspeech—that’s another huge part of my work.

When did you discover Henry James?

10, 11, 12… which is bizarre, because Henry James, he of the famous four-page sentence, lover of the comma, champion of the necessity of the appositive phrase… My introduction to Henry James, oddly enough, was The Sacred Fount, which was not easy. The subject of that novella is not there, quite on purpose – or, let me be more careful: when is reading misreading?  When is theory confabulation?  An impression is given, and a certain type of mind spends hours analysing relations in order to materialise the whatof the impression in dialectical relation to its source – but only to have the “Aha Erlebnis” stricken, rejected by those about whom the impression is made.  And why?  Because it is false or too true?  Presumably more rumination, imagination, and theory’s peregrinations ensue.  As a kid it was like, “Wow, this speaks to me.” Send in Kafka.

Often as a kid, you’re attracted to things that seem more adult, or seem different from what you’ve been conditioned to understand things are supposed to be…

For me, it was something different. It was that this novel was finally clarifying to me of what I was living: that the suburban basement life with records and television and After School Specials was a strange hologram, and Henry James’s bizarre world of the mind was true. It was because of Henry James that David Byrne could be true: “this isn’t my beautiful wife.”  So, you had to know that life was going to get weird from there.

What were your musical touchstones?

Verdi – more of the Don Carlosto Otelloend than Traviata, which in no way denies me the right to say, “È strano!  Cessarono gli spasimi del dolore. In me rinasce – m'agita insolito vigor! Ah! ma io ritorno a viver! Oh gioia!”on my deathbed.

No! It really wasn’t! I didn’t know that that was highbrow. And again, this is a recipe for why school was a weird place for me, because it is strange to grow up as a child to find that particular arias are clarifying, and you want to go to school and tell your friends, “Don’t you just identifywith Eboli in ‘Oh Don Fatale’?”  “What? What are you talking about?”   Air violin doesn’t cut it in junior high with the air guitar crowd, but the thrill of conducting Dvořák from the score, even through page-turns to match the skips of the old record, had to be a match for their making it through anything by Van Halen.

Not just out of self-preservation, I also had a real love and need for… my trajectory was mod, ska, then slamdances… (*laughs*) lotta boots, lotta torn t-shirts in the punk era. East of Main Street in Toronto there were pop-up after-hours clubs where there would be slamdancing. Slamdancing was a very necessary thing in high school.

How much of that do you keep with you now? Are you still interested in punk?

It lives in my DNA as anger.

You spoke about the parallels between music and literature. Were you conscious of this growing up, or did it click into focus in academia?

Well, I went into academia in many ways to study, expand, explore, and find a way to articulate what I was seeing and thinking, and to try to find a community of people I could talk to. Early on, when you’re trying to learn and therefore figure out Mahler songs, Schubert songs—the figuring-out process isn’t just, “Where are the notes? How can I get my voice or my hand to get these notes?” It’s to figure out phrasing, and figure out the relation between intonation and meaning, and intonation and all that stuff that becomes inhabiting the song. You don’t perform a song in the sense of, “I am going to go read a piece of paper.” You find a way for it to come into you. It’s more like the song inhabits you, so it becomes – so you become – a living thing, and that’s what performance is.

So, it was a very strange trajectory in my Master’s. In my Master’s, I started learning a lot more literary theory. This was deconstruction—Paul de Man, Derrida—and all of a sudden, now I was getting a discourse about literature and poetics that I had been feeling when reading music. That’s how those two things came together. The Master’s very much readingMahler, Verdi and Mozart, testifying deconstruction.

What made you interested in transitioning to becoming dean?

Frustration. I love thinking, I love writing, I love teaching—all of those things, if you do them seriously, are really hard. I think to be a good writer, a good composer, a good teacher, you have to have a certain commitment to masochism, because you have to like how much that stuff hurts. I think many writers would tell you there’s a certain pain staring at a blank screen for a long time going through these weird psychodynamic narratives of failure and imposter syndrome.

So, I love that, I love my masochism… but I also can fix things. The cost is borne by the writing and the individuals that you would have affected in a classroom. You make a bargain that you’ll try to affect a greater number of people—although you may not know them as individuals—by sacrificing your other joys for structural change. Welcome to a different kind of frustration, because it’s so much about politics and economics—none of which I have the character for—but I can often see solutions. So being dean, I hope, fingers crossed, is about assembling the right team of people to figure out where are the good things, where are the bad things, how do we fix things, and do we have the right personalities in place so we can do it as a team, because I can’t do it alone.

There have been a lot of changes in the education sector. What will be the role of FGS in the next ten years?

Well first, I would say it’s a shift in the role of FGS within the university itself. Brief history: when York was founded, one of the first things the Senate did was establish a Faculty of Graduate Studies, so all graduate education—we’re talking really small numbers at that time—would happen within this Faculty. So it was a very centralized model that we lived with… until we got too big. Once we became this monster university, we had to change the way we organized things, and it was difficult to imagine all of graduate work sitting in one Faculty. Graduate work is happening in all of the different discipline-based Faculties and programs—it’s sort of artificial to have it imagined in one place.

The first change is to try to find the right balance where graduate work is happening inFaculties, acrossFaculties, and what kind of organization (FGS) do you set in the centre to help facilitate that kind of dynamic? So, in one sense, it’s a more decentralized model with a better articulated centre to help facilitate all those processes… but it means a lot of structural change in the institution, which is good.

That’s FGS in the institution. I think our goal is to encourage new ideas, encourage new work. I think a lot of people come to university because they want to learn the old and the necessary what has been… which is simply to say: “I need to know the foundational stuff I don’t yet know.” And yet, that knowledge, through the experience of graduate education, has to transform so that because you have learnedwhat has been, your goal now is to create what is new. That’s tough, not everyone can do it.  I think FGS plays a role with all the programs to keep encouraging new ideas.