It’s hard to believe that Jesse Thistle never intended to be a writer.

“I’ve got all these fancy titles now, but really I’m just a storyteller,” he told a captive audience at York University’s Sandra Faire and Ivan Fecan Theatre on Tues. Nov 19. Thistle spoke sincerely, but it was evident to anyone at the 2019 Kitty Lundy Memorial Lecture — which he headlined — that Thistle is much more than just a storyteller. 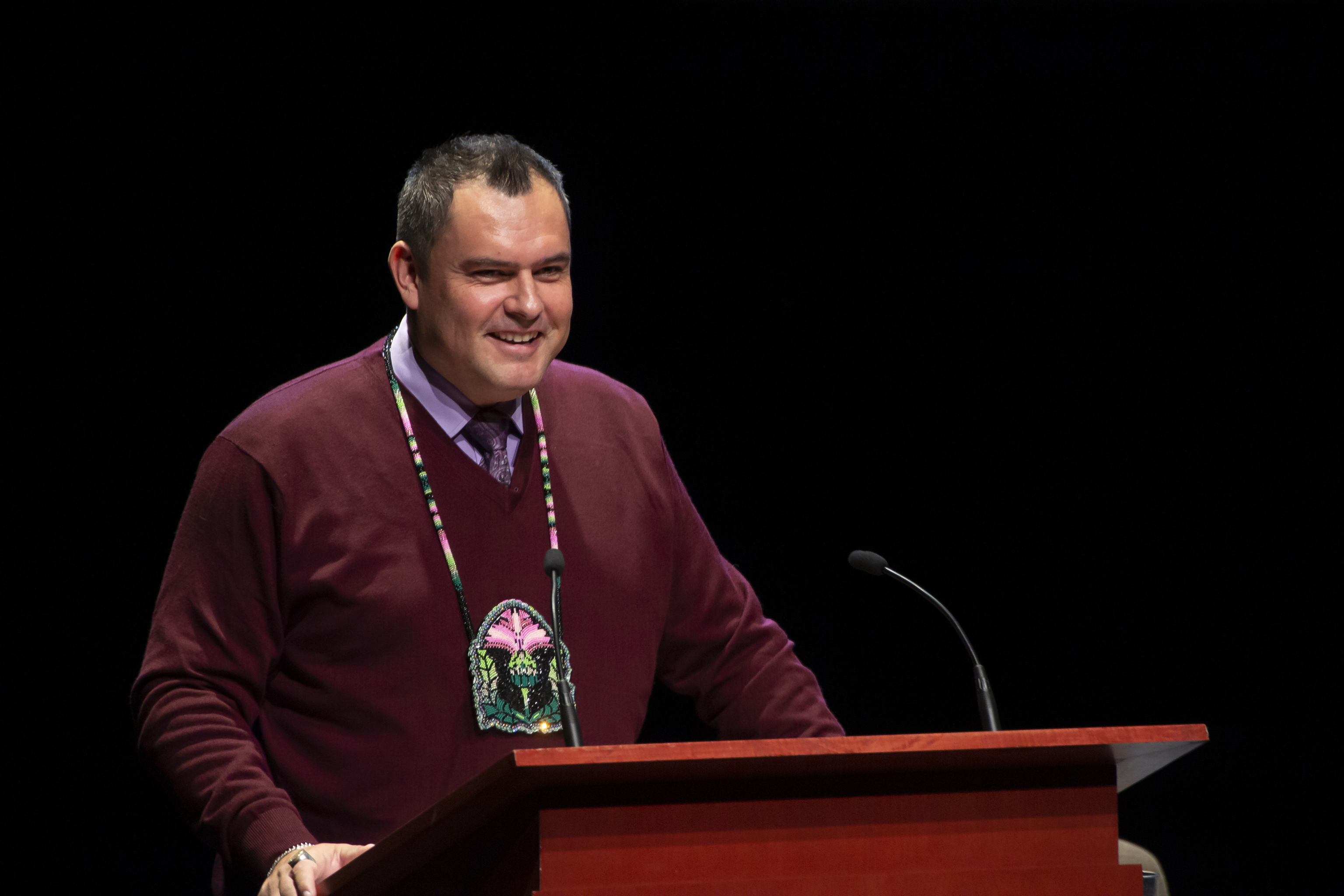 A PhD candidate at York University’s Graduate Program in History and an Associate Professor in Equity Studies, and author of the best-selling memoir From the Ashes: My Story of Being Métis, Homeless, and Finding My Way, Thistle was lauded for his courage, honesty and resilience by the three artists and panelists who joined him at the lecture: Shane Belcourt, Jesse Wente, and ShoShona Kish.

“Stories like Jesse’s are like a road map back home,” said Kish, an Anishinaabekwe community organizer, producer, activist, songwriter and JUNO award-winning artist. “I don’t know how many of you have read this book, but I’m just really happy that you’ll have this medicine.”

Kish reflected on Thistle’s experience with homelessness; it brought back memories of her grandfather, who lived on the street for many years. Just like so many other individuals on the frontlines of colonial intergenerational trauma, Kish noted, her grandfather passed away without sharing his story.

“One of the products of colonialism and oppression is that our stories get cloaked in shame, and they get buried,” she said.

This is why, for Kish and the other panelists, stories like Thistle’s are essential to the process of healing and reconciliation. 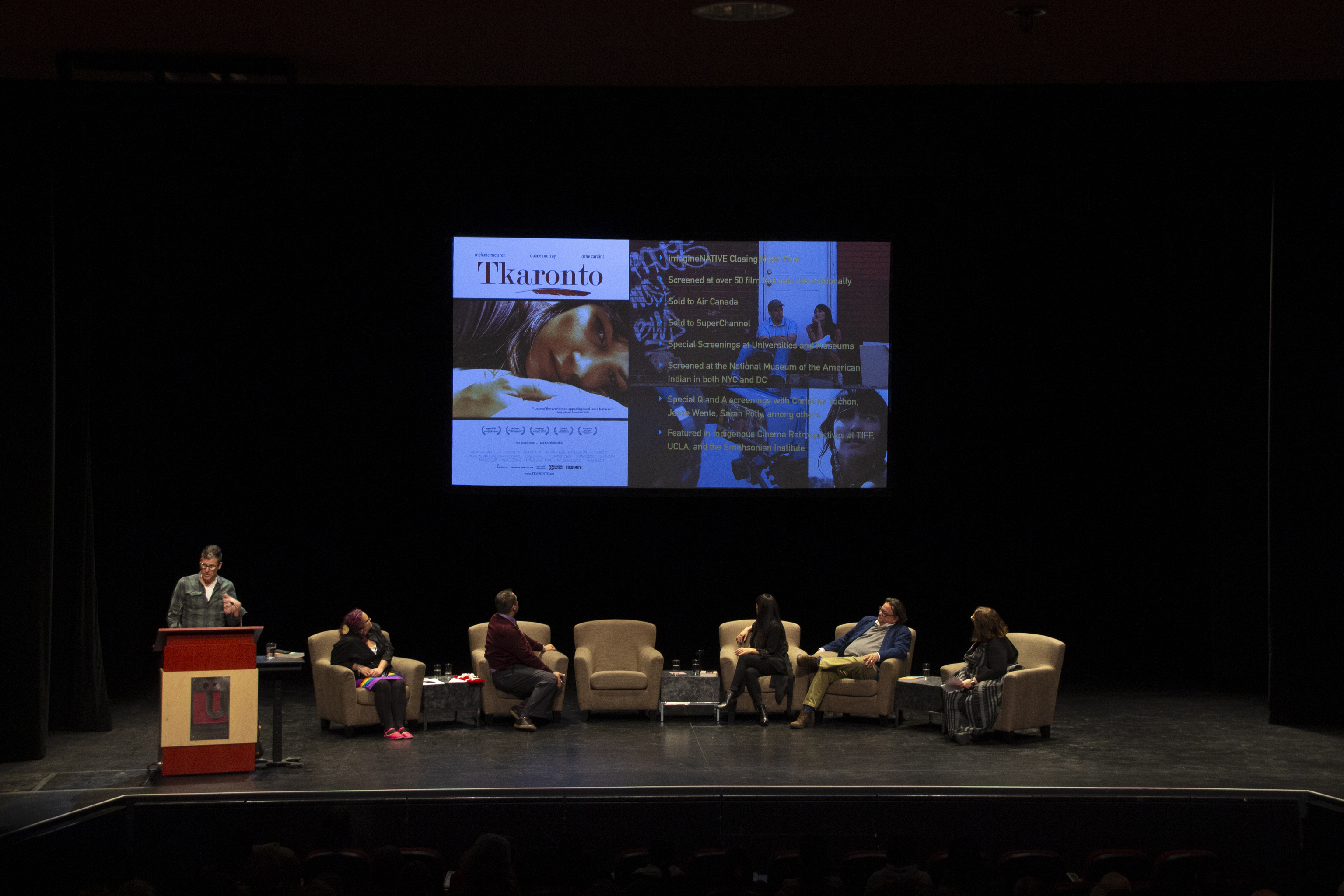 For Wente, sharing stories is not only a way of reclaiming Indigenous sovereignty, but also a vessel through which to counter harmful colonial narratives. As a self-described ‘Ojibwe dude,’ Wente has had a long career as a film and pop culture critic, but to him, “film is just the conduit … it’s really about the story.”

He talked about the need to have more Indigenous representation in artistic spaces, recalling moments at prestigious events like the Cannes Film Festival where he was the only Indigenous person in the room.

Belcourt, a Métis cinematographer, writer and director, echoed these sentiments, and added a plea for other Indigenous folks to continue to share their stories. “Your Indigeneity is your gift and your responsibility.”

Thistle ended the night by sharing a token of wisdom he received from one of his elders: the fact that storytelling is a form of preserving culture, memory and identity.

“My elder reminded me to present the book in a way that reflects that we are strong people,” Thistle said. “We resist.”

About the Kitty Lundy Memorial Lecture

The annual Kitty Lundy Memorial Lecture honours the late Kitty Lundy, an admired educator of sociology who was associated with York’s former Atkinson Faculty of Liberal Arts & Professional Studies from 1986 to 1989. Wide-ranging in her accomplishments and interests, Lundy felt particular concern for the fields of education, occupations and women’s studies, and demonstrated a keen commitment to students pursuing their studies on a part-time basis. To honour her memory, the Lundy family established the Kitty Lundy Memorial Fund, which supports the annual lecture.

The 2019 Kitty Lundy Memorial Lecture was co-hosted by The Department of Equity Studies, the Aboriginal Students Association at York (ASAY), the Centre for Aboriginal Student Services (CASS), the Indigenous Council, the Indigenous Studies Program, the History of Indigenous Peoples Network, the Robarts Centre for Canadian Studies, the Department of History, Office of the Provost & Vice-President Academic, Office of the President.