Dahabo Ibrahim, a master’s student in education at York University’s campus in Dadaab, Kenya, is the inaugural recipient of the Centre for Refugee Studies’ (CRS) Anthony Richmond Scholarship.

This new scholarship recognizes promising graduate student research on the intersections of forced migration and environmental changes, such as climate change, flooding, drought, forest fires and land or sanitary degradation.

The scholarship was created by Freda Richmond in memory of her husband, Anthony (Tony) Richmond, professor emeritus at York University. Richmond established the Department of Sociology’s graduate program and was a founding member of CRS. He was known for his civility, lack of pretense, sense of fairness and commitment to scholarly life, as well as his encouragement to women scholars in sociology. 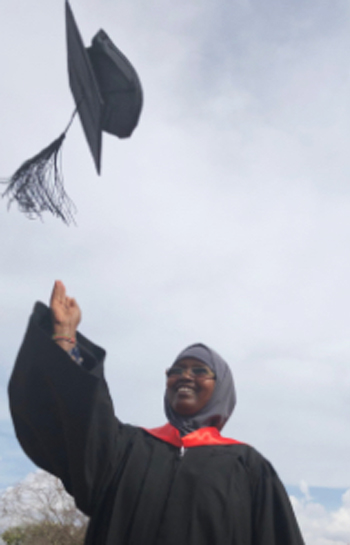 Ibrahim is pursuing her studies through the Borderless Higher Education for Refugees (BHER) project. This project aims to make educational opportunities available where refugees need them, with a particular focus on gender equitable programs.

“Dahabo’s research exemplifies York’s commitment to creating positive change in the world, no matter where in the world we happen to be located,” said President and Vice-Chancellor Rhonda L. Lenton. “The BHER project shows how empowering students to collaborate and innovate to address global challenges can produce extraordinary results, for themselves, their communities, and for people everywhere.”

“There was a strong pool of applicants for the scholarship, which demonstrates significant interest among York graduate students in research at the intersections of environmental change and forced migration,” said Sean Rehaag, CRS director.

Rehaag explained that Ibrahim’s application stood out based on her impressive and highly topical research and her strong academic performance.

“The adjudication committee was also very pleased to see research about forced migration undertaken by a York scholar with lived experience in this area,” he said.

BHER Co-Director Don Dippo was thrilled to hear the news, noting that the whole BHER community will celebrate Ibrahim’s achievement.